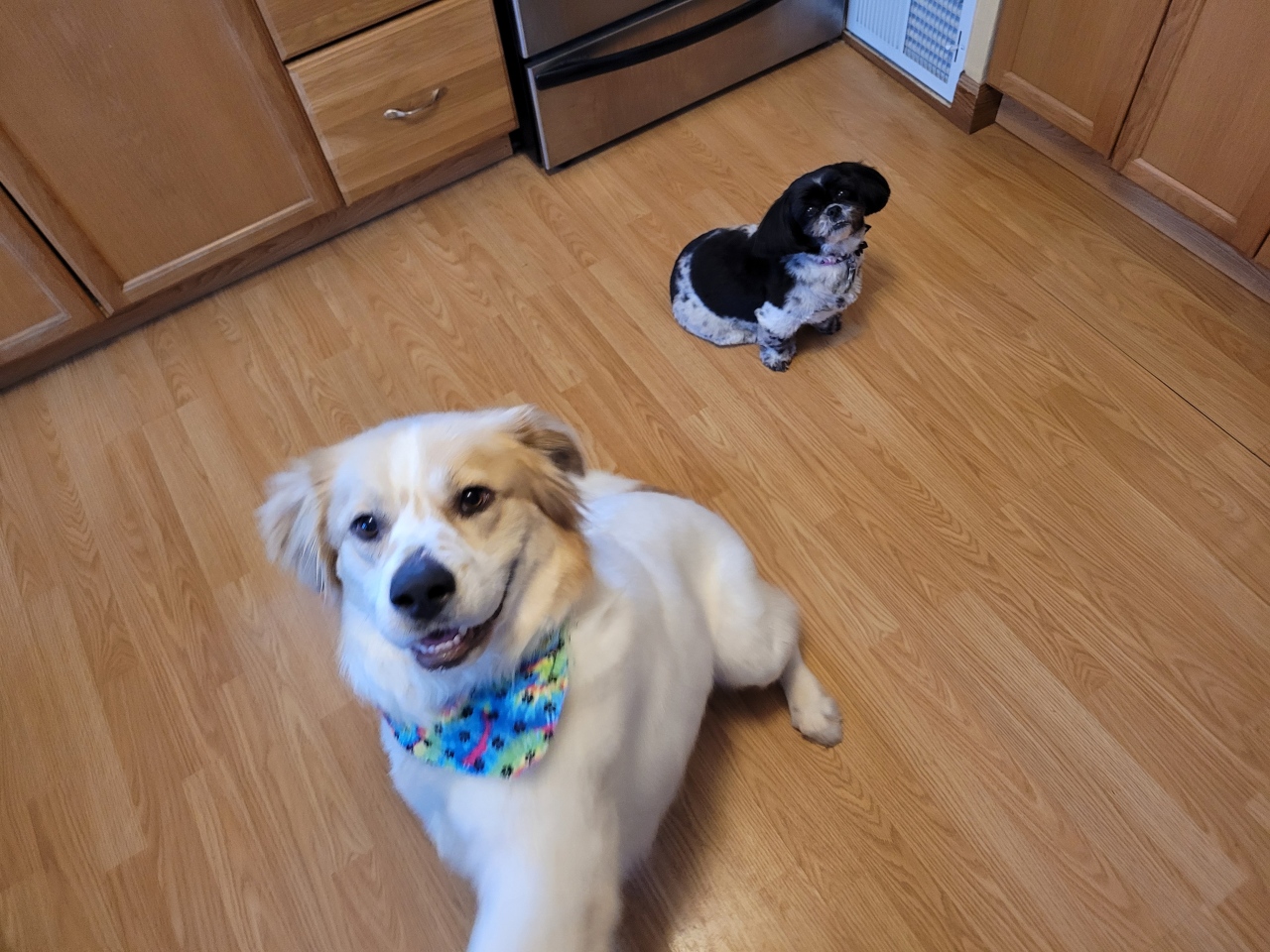 Hi, it’s Mabel! I realized that I hadn’t posted about our most recent foster dog yet, and I think it’s important that I mention him. He’s already adopted, so by the time this gets posted on my blog, he’ll likely have gone off to his forever home.

His name is Baidu, but we just call him Du. Du is our 16th foster dog, and he’s very different from the dogs we normally take in. Molly chose him because she had a good feeling about him when looking at his photo. She said he looked sweet and calm, despite being 55 pounds (much bigger than most of our fosters.) I think one of the deciding factors was the fact that he looked like Winston, the giant “polar bear” we fostered.

Anyway, Du is not as calm at Molly thought, but she’s still happy she chose to foster him. It took me a while to get used to him, but I think I’m finally okay with him being around. Not only is Du huge compared to me, but he’s very clingy. He loves to be as close to Molly as possible, and he never gets sick of giving kisses. He seems to think he’s a lap dog, even though he can’t comfortably fit on a human’s lap.

Du has gotten into some trouble during his time with us. He had a few accidents at first and he chewed up an Xbox controller, but those are pretty normal young dog things (he’s about three years old, maybe less). But he also scaled the fence outside while Molly was shoveling snow. Luckily, he’s not a flight risk, he just wanted to be close to her. He also managed to get out of his crate twice, but the crate door was closed both times. We’re still not sure how that happened.

But Du makes up for all the trouble because of how sweet he is. Even though I like to keep my distance from him, I know Molly adores his cuddles and kisses. If you’re not petting him enough, he’ll set his paw on you to ask for more pets. I think it’s annoying, but Molly won’t stop talking about how cute it is.

Even though Molly prefers shy dogs, it seems like most people like energetic, loving dogs more. Right away, Du had lots of people interested in him, so it didn’t take him long to find a home. Our time with him has been fun and exciting, but I think Molly is hoping for a little old dog next. However, she likes to mix it up once in a while so she can get experience with all kinds of dogs. Sometimes, the perfect dog ends up being a dog you never expected!