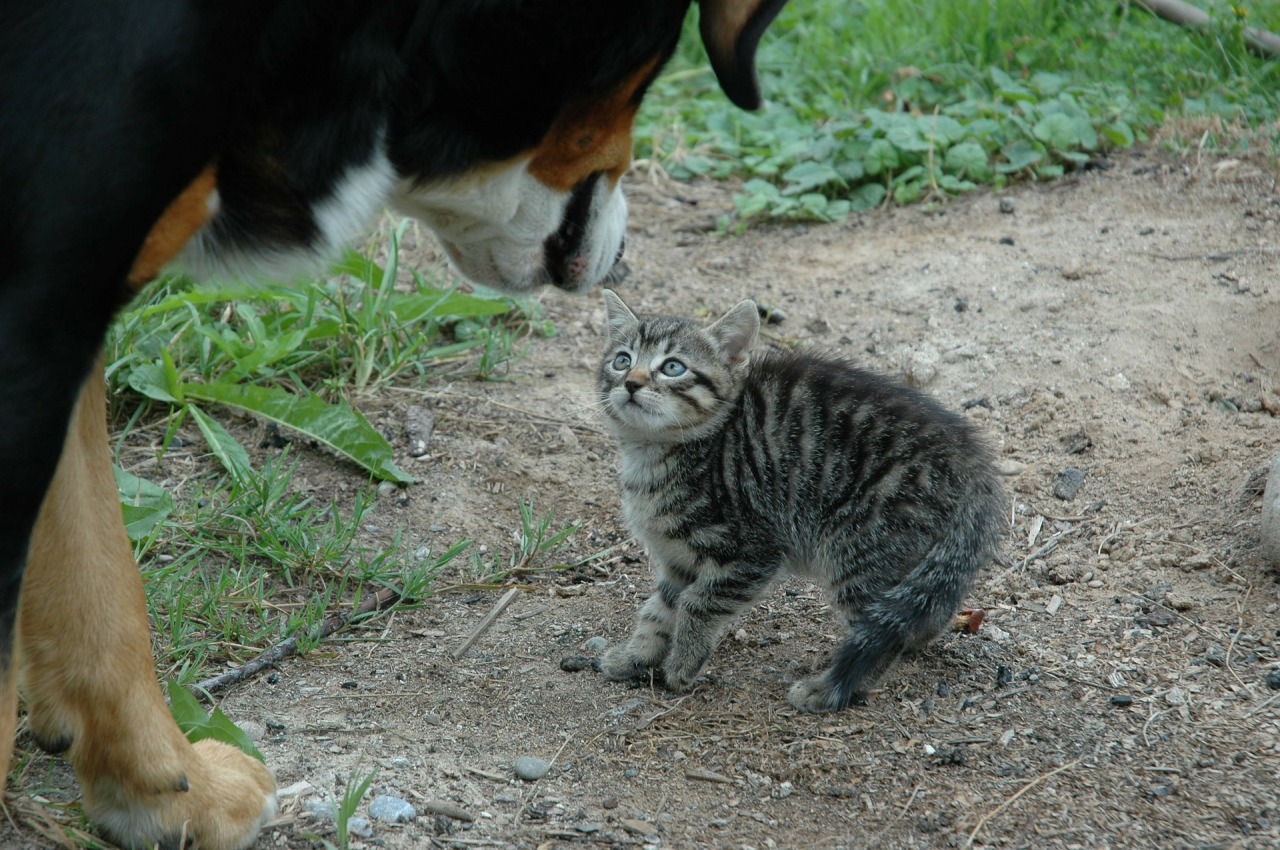 It’s a common rumor that dogs and cats are sworn enemies. In cartoons and movies, the dogs and cats always seem to be plotting against each other. However, that’s not exactly real life. Sure, some dogs and cats can have their feuds, but for the most part, dogs and cats don’t actually hate each other, especially if they’re properly introduced.

Can Dogs and Cats Get Along?

It’s actually fairly common for dogs and cats to coexist. Sure, they’ll likely be curious at first and they might chase each other from time to time, but they can be friends! I personally don’t live with a cat right now, so whenever I see one, I just can’t stop staring at them. They’re such weird creatures to me!

Dogs are usually more used to humans and other dogs than cats, so it’s likely that your dog will be very curious with your cat at first. Whether or not your dog and cat like each other depends on their personalities, but even if they’re not fans of each other, they can still learn to live together in peace.

In order to make sure your dog and cat learn to at least tolerate each other, you need to slowly introduce them and give them time to get used to each other.

How to Properly Introduce Your Dog and Cat

Don’t expect your dog and cat to be snuggling with each other after one day. There are a few ways to properly introduce your two furry friends to help them get along as much as they can.

If possible, it’s best to get your dogs and cats used to other animals at a young age if possible. If you adopt your dog as a puppy, you could try introducing them to a friend’s cat to see how they’ll react. That way, you’ll know whether or not they get along with cats before you adopt a cat of your own.

However, even older dogs can learn to like cats. The first introduction between your dog and cat should be slow. The new animal should first get some time alone before meeting their new furry sibling. Try keeping them in separate rooms for a little bit to give your new dog or cat some time to get used to their new surroundings.

Then, when you allow the dog and cat to be in the same room, make sure to monitor them closely. Don’t leave them alone together until you’re confident that they’ll behave. Seeing a different animal for the first time can be scary for many dogs and cats, so they’ll likely both be very curious at first.

If your dog behaves well around the cat, reward them. Give them treats or praise to let them know that they’re supposed to be nice around their new family member.

For the first few days, it’s likely that your dog will try to chase the cat now and then. Of course, you don’t want your pup constantly scaring your cat, so you’ll likely need to train them more to stop this bad behavior.

Like the first introduction, you’ll want to reward your dog every time they hang out with the cat without chasing them. Eventually the two animals should learn to peacefully coexist.

Things to Look out for

If you are ever unsure if your dog and cat will be okay on their own, you can leave them in two separate rooms when you’re not home. That way, you don’t worry about them causing any problems when you’re not around.

Another problem that you likely didn’t anticipate is the litter box. It’s possible that your dog will try to eat the cat litter. It might sound gross to you, but I did it when Molly’s old roommate had a cat, and many other dogs do it too! In order to prevent it, her roommate got a door strap for the room with the litter box. It allowed the door to be wide enough for the cat to slip through, but not me. It worked pretty well, and I eventually learned that I wasn’t supposed to be eating out of the litter box.

Like with any type of training, patience is key when it comes to introducing a dog to a cat. Don’t expect everything to happen overnight and don’t expect them to love each other. Every dog and cat are different, so figure out what’s best for your particular animals.

2 thoughts on “Can Dogs and Cats Be Friends?”